Gorgeous morning, gorgeous trip, thanks to my friend Matt for showing me an incredible time!

is looking forward to tonight's

is looking forward to tonight's We Pedal Uphill premiere (and then will devour the BSG finale over the weekend, thank Heaven for DVRs!)

WE PEDAL UPHILL OPENS TODAY AT THE CINEMA VILLAGE IN NYC 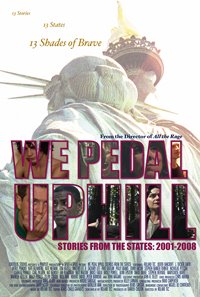 For tickets to the Cinema Village's showings (now through Thursday March 26th only), go to:

And for a trailer of the movie, go to: http://www.wepedaluphill.com/

apparently needs to start reading before bed, just like Churchill did.

has been humming "I'll be

has been humming "I'll be waiting for you" all morning (from Roland's WE PEDAL UPHILL) www.wepedaluphill.com

is stressed about trying to

is stressed about trying to be breezy

is happy about Ro's NY

other than the punchline "Patty

other than the punchline "Patty O'Furniture" I got nothing of substance to offer up for St. Pats Day

One Of TV's Best Series Wraps Up

‘Battlestar Galactica’ at the UN - The Marquee Blog - CNN.com Blogs

Tonight, the two lead cast members of the highly critically praised show, Battlestar Galactica, will appear at the UN. How I wish I could wrangle a ticket to this!

BSG as it's called in short is not just, as the article concurs, a shoot 'em up, aliens with bad masks sci fi show... it, like the first two Star Trek series uses outer space to illustrate the most Earthbound problems.

I have to admit I resisted the show. I was never a huge fan of the original run in the late 70s although I liked the concept well enough - the remnants of twelve worlds traveled through space to find a mythical planet called Earth, home of the thirteenth tribe. There were all sorts of allusions to Egyptian mythology and astrology and it was good fun... but it never really had any bite to it and, for me, was fairly pedestrian and dull.

When the new version appeared, I didn't take much notice, in my head without seeing it, lumping it in the same category of sci fit as the Stargate series and those types of shows that are overacted, underwritten and generally not very good.

But flash forward a few years and my current roommate raved about it endlessly so I thought I'd give it a try prior to the final season premiere this January. Do you know how long it takes to get through 70 hours of television when you're chasing the discs around town (surprisingly difficult to find despite the popularity of the series, or maybe because of the popularity of the series) and you know, have a life that includes a boyfriend, a real job and well, a life.

Quickly I was drawn into the complex world of the Adamas and Madame President and the Cylons who look like us. The writing most times flawless... even when mediocre head n shoulders above most of what's on. The moral problems that evolved out of what looked to be pedestrian situations, plot twists that made sense rather than "gotchas" done for a momentary rush of plot (Yes, sadly I'm looking at you, LOST) and production values that were as attentive to starship explosions as well as to where memorial pictures were placed on a wall over time.

And now, this Friday, it's the last one.. I've watched the last few in real time (not on disc, not online but actually on the SciFi channel) and although late to the party, I will nonetheless be watching the final episode hanging on every word just like all the other devotees.