The Beauty of It All is Larger Than You Think 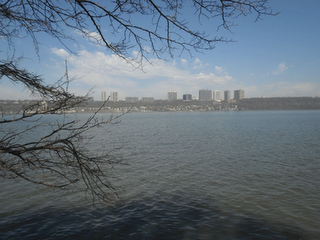 It's easy, no impossible sometimes to not get caught up in The Murk of pessimism and all that seeing the glass as half empty (believe me, I know, I've been there) but like the trees in this picture, they're not really threatening the utter beauty of the river, the opposite shore (Jersey) and a beautiful spring sky.
So next time you think that The Murk is threatening your joy, you just think about these trees and realize that they only block your view, if you let them. :)

Jumping for Joy - What You See is What You Get 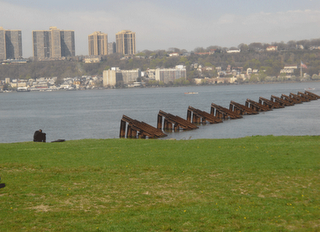 When I was riding my bike this past Saturday, the shoreline along the Hudson streteched out before me with unlimited potential.
But at one point I noticed this man huddled over by the side of the river. Could he be depressed or tired? Did someone just dump him or is he just out to get some sun on the first great day of spring?
Whatever the answer is, I'll never know but I did notice one thing.. he's the 'dot' in an exclamation point and it made me think: maybe we're so hung up on our own problems, we don't realize that just by being alive, we are an exclamation of joy to other people.
So live today as though you are an exclamation point for someone else and help bring some joy to others (even if it means forgetting your own 'stuff' for abit).

What You Make of It 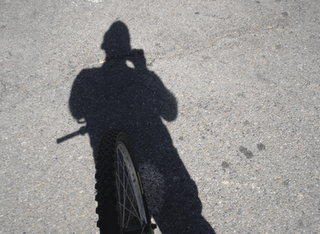 Life is what you make of it. I took this photo when I went for a bike ride this past weekend. The weather was glorious and I never tire of the path up alongside the Hudson to the 'little red lighthouse' under the George Washington Bridge.
Life is what you make of it. Now, I know that the photo is of me taking a picture of my shadow and the front tire... but if I didn't know better, I could be eating a sandwich or playing the harmonica?
How often in life do we see things and react depending upon what we think we see rather than what is actually there? I certainly know I've done it. Have you? 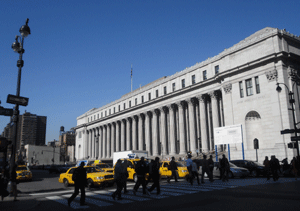 Another beautiful day in paradise. :)
This is a shot from a few days ago at the main post office just down the street from where I work. To think that this could have been torn down at some point because it was 'old'!

OK I'll admit it, I have a sublime, somewhat perverse joy is watching this video posted on the site MicrowaveCam.com. The deliciousness of seeing the volcano of marshmallow foam up from the cup and onto and down the side and around as the glass turntable continues to spin. Delicious. Especially good is the way that the Halloween faces slowly distort but never quite disapeer making me wonder: what the hell are these things that I'm putting in my mouth? Blech. Well, it's certainly the best peep show I had this past weekend. Uhmm well, you know what I mean. :)

Yesterday 2 friends of mine invited myself and a friend of theirs who has a seven year old daughter to go to the Ringling Brothers circus at Madison Square Garden. Four adult gay men and one 7 year old girl. It was like the time I directed a play at the California Theatre Center in Sunnyvale and four of my friends drove down together but I didn’t know whose name to give for the tickets waiting for them and so I said to the woman who was in charge of the ticket table, ‘you’ll know them, four grown gay men, no children’.
Anyway, yesterday’s trip to the circus gave me the following reflective thoughts: 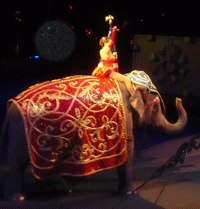 1, The spectacle of hundreds of whirling thingabob lights throughout the crowd is one of the most beautiful man made sights. A child’s smile reacting to said sights is one of creations more beautiful sights (no matter how much said smile is stuffed with the man made delights of hot dogs, cotton candy, popcorn or snow cones).

2. I love elephants and feel that no matter what I know about how they might be treated and trained, I still want to see them and the entire day was made for me at the sight of a dozen pachyderms parading through the coliseum, some with beautiful ladies in colorful costumes riding them. It’s a simple pleasure and I can’t underline enough how happy this made me and I’m willing to look the other way on animal rights abuse issues (ok no I’m not but I was for the few minutes they were out there). 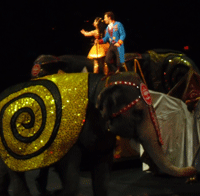 BTW I could swear I saw one elephant snark to another. Three of them were lined up to come out onto the main floor; one of them ducked their head to the other in a way that said to me “hey, pal, get a load of THIS crowd, wanna go crazy with me and watch everyone run in terror? We’ll totally be put down but what a way to go, and hey, we’ll be on the news!” to which the other one just did their best ‘harumph’ at and ignored them. I still maintain that one of the elephants when walking past me winked at me. Just me. No one else. Really. Why don’t you believe me? :)

3. The Roadies were almost more interesting to me to watch than the main acts.. although in concert with the performers, the Roadies completed a sort of ballet --- actions (walking to a spot to put a chair or bench down while something is happening elsewhere in the better lit area) and reactions (taking said chair away, or helping a performer down a rope ladder from a tiny staging area on the ceiling) were somehow compelling to me. Although that the Roadies seemed completely indifferent to acts around them left me feeling both confident that they had seen it all before and there was no real danger and worried that they were getting to complacent and Something Bad would happen because they weren’t paying attention.

4. There are people who are still willing to get up on all sorts of manners of ropes, wires, cages and moving contraptions and walk, run, ride bikes, do flips and generally endanger their lives for the entertainment of others. There's something beautiful and a little alarming about that! :)

Half the fun of a circus (from what I can remember in my one or two childhood experiences going to them) seems to me to be not only the sideshow attractions and the games but also the smell of a circus, the gritty odor of live animals mixed with cotton candy and popcorn.

I think it’s part of the same fun that’s lost on me with big theme parks. To me, ‘riding the rides’ (as my Texas friend Karen said in the 80s when we were working for the Bible camp) means walking through the dirt fairground and the fairway and seeing the town you live in from the top of the ferris wheel.

In any event, it was nice to spend some time with friends and over and above everything else, that alone made the circus worthwhile. J

The Miracle of the Internet 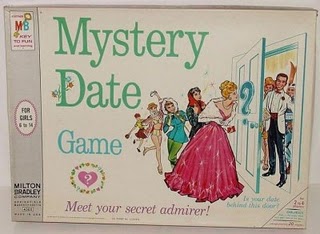 Over the past couple years I’ve indulged in time traveling, dipping into my past, reliving certain times and eras and Googleing people and catching up with them. It’s been a great time. I never assume that anyone remembers me especially if it’s someone that I dated a few times back 20 years ago. They may have made an impression on me (no double entendre intended) but I can’t just take for granted that it works both ways.

When Facebook re-appeared so did a collection of friends and acquaintances from years past and there seems to be no end to the excavation. Just when I think I’ve exhausted everyone I’ve ever met, along comes a friend request for someone ‘new’. And that’s just been pretty damn amazing. There are a couple people in particular that sent my heart into paroxysm of joy when I saw their name on the friend request and a couple that I simply went “oh, you’re kidding, right?” (these would be people who made my life difficult who now want to be ‘friends’… you’re kidding, right? I know it’s been mumblty mumble years but honestly, really? Friends? No way. Ignore!)

But this morning the unthinkable happened: I got an email from a woman all enthusiastic about reconnecting mentioning a reunion and other friends. She was so excited to be in touch with me and I momentarily got wrapped up in it until I realized: I have no earthly idea who this woman is.

Now, I can name pretty much everyone in my kindergarten class picture (me with the clip on tie and bright sunny smile) and I know the name of my first grade teacher (Miss Trinka) and I remember vividly all the people I worked with at Tarkington, O’Connor, O’Neill (it’s funny that I don’t have dreams about that place to be honest considering I was there when the SF earthquake happened) and I even remember a few names and faces from my couple summers as a drama camp counselor and definitely remember all the counselors I worked with the four summers I was at Lutheran Association of Southwest Camping. I can tell you various people that I temped with at Burson Marsteller both in Chicago and here in New York and I even remember the name of the delightful neighbor I had across the hall in my second favorite apartment of all time in Chicago for whom I helped pass a class in children’s literature (she also brought me Thanksgiving dinner one year when I was sick as dog). I could tell you the names of the people that I worked with at Disney when I temped there a few days every month for two years ….
But this woman, I have no idea.

So I wrote and explained that she might have the wrong Andrew Altenburg and her reply was “If there is another one of you, he is the exact same age & looks just like you and is from the same area!” to which I am left with more “who the hell is this woman?” thoughts. I also noticed that she addressed the first letter “Dear Andy”… and no one who has known me more than ten minutes knows that I never have gone by “Andy”. (UGH)

Maybe the other Andrew Altenburg, the one who goes by ‘Andy’ is straight and got married, got a job just out of college and has two kids (a boy and a girl naturally) and currently is worrying about his 401k plan and what his mid-life crisis will look like (I’m thinking blonde and stacked).

My advice to you if you time trip back through your life via the internet is this: Identify yourself and assume the other person won’t remember you. It is not self deprecating to take this position as through our work and social life, we all go through the world meeting hundreds and hundreds (perhaps thousands depending on your line of work, how much you like to travel and how long you live). Sending a picture isn’t the worst idea either.

As for my new friend, she sounds fun and perky and perhaps she can introduce me to that other Andy Altenburg at some point. Wonder if he’ll remember me?