A friend of mine knows how much I love the Empire State Building and forwarded me this video of lightning striking the tower.. amazing!! 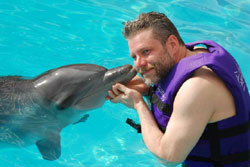 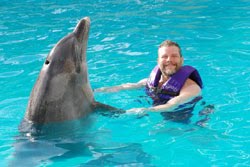 "Back in February of this year I went to Cancun for the first time. My most memorable experience while there was swimming with the dolphins. You can tell by the smile on my face that I was jumping for joy inside. 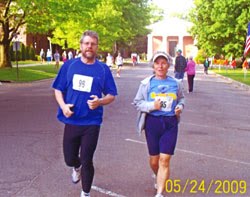 "Also as of this week I have run over 1000 miles so far this calendar year. I'm actually approaching having run 200 days straight as well on a quest to run every day for a year. This photo is a picture of my mother and I as we warm up for a 5K run this past Memorial Day. This is the second year we've run this together and I'm hoping that we'll get my dad to run it with us next year since he actually ran track and field in High School. That would make both mom and me jump for joy." Best,Todd, 2009

"Hey Andrew, Way back when you first asked for 'Jumps', I thought that one of my favorite things is to be driving home at night and have no one else on the road, in front or behind me ( the head lights can be so irritating ) You have to remember, I'm living back home in Indiana. And getting to use the high beam head lights on my Jeep is a thrill, after living in LA all those years and never having that pleasure, because of all the traffic. BUT, the thing that really makes me Jump for Joy, is when I get home at night, to be able to walk past my Mother's bedroom and "hear" her sleeping peacefully. That's the most joyful noise in the World. Hope all is well ....xx..." Randy, 2009

"As far as what makes me jump for joy, gosh, lots and lots of things. I find joy in the simplest things and the grandest things and everything in between. Of course it’s easy to find joy in the larger than life things– like rafting down the Grand Canyon or doing yoga at a New Zealand retreat. Those are “big joy” things. I guess feeling joy from the simple, everyday things is what sustains me daily. Like going for a run on the Coastal Trail, meeting friends for dinner, or exchanging a smile with a total stranger. It’s the little (but really huge) stuff like that." -Kristin, 2009

Andrew Jumps for Joy for Roland

'For the one I love most lay
Sleeping by me under the same
Cover in the cool night,
In the stillness in the autumn
Moonbeams
His face was
Inclined toward me,
And his arm lay lightly around
My breast, and that night
I was happy"
-Walt Whitman

Hey all, just a little forwarding action... wrote a piece last night about the Death of Soaps over at Extra Criticum that just went live.. if you enjoy your soaps as much as I do, go ahead and check it out! http://www.extracriticum.com/extra_criticum/2009/08/death_of_daytime_soaps.html

First, You Get Dressed.

My first paid job was that of "painter".

My dad owned a trucking company in central Wisconsin and had decided that there was better money to be made storing the cheese in warehouses rather than be the company that employed the men that drove the trucks from one warehouse to the other. In the warehouses, the cheese would be stacked in round brown tubs, sealed and cooled to a certain temperature. The tubs needed to be stored a certain number of feet away from the walls and so a yellow line, about a half a foot wide needed to be painted around the perimeter of the warehouse rooms. I had the roller brush on a extended stick and a can of yellow paint and a vague idea of how far from the wall it needed to be and .. I painted. The portable tv blared with the sounds of Greg and Jenny on All My Children and the days of summer breezed by as I applied two and three coats.

My first artistic job happened right around the same time. My dad had bought me a drafting table (just like real artists use!) for Christmas because he saw how much I liked to draw and thought that it would be better for me if I sat up at a table and drew rather than laying on my bed drawing as I had been. Then, my best friend Brian and I got this crazy idea to co-write and draw a comic strip for our weekly hometown newspaper, The Mosinee Times. Brian eventually went to college and I wrote and drew the last few months of the strip alone. The paper decided that after two years it was time to end it and as Brian was gone and my dad had just died of cancer, I wasn’t much in the joke telling, comic drawing mood anyway.

Just out of college I worked at a cab company in London as an operator. I went over on a student work program and landed this customer service position. They had a whole system where the customer who was calling in for a cab would tell you their code and their address would come up on our computer screen. It was a stressful job dealing with stressed out customers but what was worse was that they made all of us wear a powder blue vest over a white shirt and dark blue polyesther pants. But it allowed me to earn a living and live in one of the greatest cities on the planet and I ended up making friends there that are still a part of my life today.

For fun, while I was there, I took a job at a gay music video bar called Banana Max which was located in the gay neighborhood of Earl’s Court. I was 23 and fair and American and they hired me on the spot as a barback. I had to wash glasses and haul beer but I had a good time meeting new people. I also met a couple people there that I’m still acquaintances with. The owner, a pint sized raging queen had a voice that cracked the air, would tell everyone to ‘get the fuck out’ at 11pm when the bar was closing. People didn’t seem to mind and I found it amusing. Banana Max had a habit of burning down every couple years and reopening with a new name and new interior. Funny, that.

I spent most of the 90s and 00s pursuing an acting career which I never quite caught up with and an unexpected career in fundraising and event planning. It was fun and I worked for myself, spending days on end making phone calls, sending emails, brainstorming new ideas and “All My Children” was frequently on in the background keeping me company. Greg had long since moved on and Jenny had died in the 80’s in a Jet Ski accident. It was OK because she wound up on NYPD Blue and got to make out with Jimmy Smits.

A couple years ago I took an assistant job at a media company here in New York and it was allright I suppose. Mainly the people I worked with was what kept me going through corporate b.s. that seems to unfailingly permeate every endeavor that we as human beings strive to take on.

But, as with many people in New York, the recession catapulted the company into the pit of economic downturn. As the ranks of the people around me dwindled, I knew that as an assistant, my time to leave would come, sooner or later. Surprisingly, it was laterish. After about 100 people had left the company over the course of a year, in July, another batch of us were let go.

There is some comfort in knowing you’re not being let go because of incompetence but it has, unexpectedly, hurt to be unemployed.

At first I outlined all the projects that I was going to do this summer and all the places and friends I was going to visit. I had calls out and got the energy flowing … I even took a trip to San Francisco just after my last day thinking that I’d be able to reconnect with old work friends from my event planning days. But I suppose, not surprisingly, the work friends were.. working and as I’m not really doing much of the event planning anymore, there was no incentive for them to incorporate me into their workday.

I returned from the trip feeling sorry for myself and ended up bingeing on the things that one does to cope with stress: sleep, food, tv, email, the internet, hopeful thinking and avoidance of the world in general. True, I’ve been able to get out for bike rides but there have also been days when I’ve sat around checking my email obsessively after sending resumes to a half dozen places.

In my logical mind I know that these places get a few hundred resumes for every job even in a more normal time, I can’t even imagine what they’re going through now. I even switched on “All My Children” and that just sucks these days (although I do have to admit that “One Life to Live” is rocking the socks off me these days).

I realized this morning that I hadn’t really been anywhere in a couple of days and had hardly left the apartment. Part of it is the intense heat and humidity but part of it is just a general sense of gloom.

I realized this morning that I have to do something to change it because no white knight is coming to save me, it’s time for this Cinderfella to save himself. And the first thing to do? Get dressed.

That’s right, get dressed. For too many days this month I’ve wandered around my apartment in boxers and a tank top. True, it’s summer and I’m worried about driving up the ConEd bill by turning on the air conditioner for long stretches, but sitting around in my underwear all day long for days on end, well, it’s not good.

Granted no one is going to see me but it’s not really about that of course, it’s about an intangible feeling of being a productive person in the world and getting dressed is part of that.

So I’ll take a shower, and then I’ll get dressed and while I don’t really have anywhere specific to go today, moping around here won’t help either.

And I’ll be sitting here, clean and dressed waiting for it to show up.

Tags: what to do when you're unemployed

Ro and I took a trip to DC this weekend and before enjoying some museums, caught a ride on the carousel on the Mall. Listen carefully to the audio and also, there's a shot towards the end that reveals that we're the only ones on the Carousel! It was goofy fun...!