why were all the women at last night's Oscars wearing hairstyles from "Valley of the Dolls"? 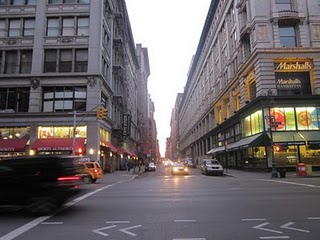 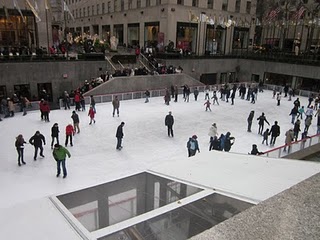 Despite my Wisconsin upbringing, I've never been much of a skater. Maybe it was because we lived in the country and the nearest water was the Wisconsin River (which froze in some places) and there was, I think I remember, a rink in town, but it wasn't an Altenburg Thing to Do I suppose. I never felt it was anything out of the ordinary until my city-bred friends were astounded that I had gotten to my fourth decade and didn't really know how to skate. Being a child of the 70s I do (well, did) know how to roller skate but it's not quite the same thing, is it?
I went out out to Wollman Rink in Central Park a few winters ago with friends from the Gay Men's Chorus - it was an afternoon where men skated arm in arm and one of the Chorus' drag queens gave a good show to all the families unsure of what to do with this sudden turn of events. I was pretty happy with my progress but I didn't follow it up.

These days every morning I go to work I pass by the 30 Rock ice rink. The other morning I watched with great interest the Zamboni machine work it's magic and another morning, I saw this, a crowd already gathered at a time when humans should barely be awake much less out and skating (and I'm just talking 9am).

It occurs to me that one can go through life and merely watch it happen or one can step into one's own life and participate. I think I'm pretty good at participating but I've still not gone skating more than that one time at Wollman Rink and while 30 Rock may be a little too touristy for me to actually skate at (sometimes the line is worse than a ride at the Disney parks), the opportunity sits and stares at me every day and says 'if not now, when?"

So I challenge you to this - in the next week identify that thing that you've been putting off doing. It doesn't have to be anything as dramatic as skydiving or getting a tattoo, but if you've always wanted to skate, get outu and skate even if it's just to fall on your ass but know that you tried. Try a new dish at your favorite restaurant or submit a story to the New Yorker (these are things I'm telling myself to do btw) .. but don't wait to long.. because eventually, the ice will .. well, it'll melt and then you've missed the opportunity.

And of course, if you do that thing that you've always wanted to do, write to me and tell me what it is, because I'd love to hear your skating stories..

That Must Have Been Some Good Party 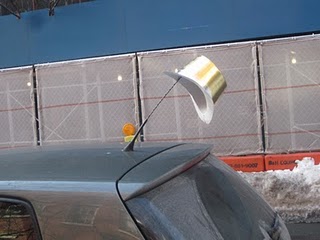 New Year's Day 2011 and I'm out walking with Ro - a very civilized way to start a new year, by the way - and I noticed a hat perched on the antenna of a parked car.
My imagination goes wild thinking of all the options how the hat ended up there - twentysomethings partying up a storm, leaving the hat behind after one in their group throws up; someone thinking putting a hat on some car would be funny; maybe a lonely partygoer walking home alone after giving someone they liked a new years kiss, leaving the hat behind as a reminder to them when they walk by of the night before's lingering feeling upon their lips.... maybe any, maybe none.
And what of the owner of the car, wonder what they thought when they came to the car and found it? Amused? Annoyed? Inspired? Nonchalant?
And it occurred to me that perhaps this imaginative curious exploration would be the theme of 2011. There are worse ways to spend a year!

Christmas on the Empire State Building 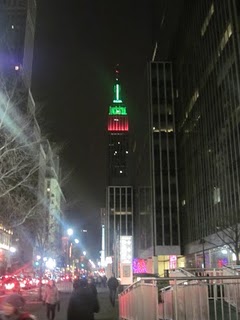 Yes, this was our Xmas tree this year. I felt that everyone posts pics of their trees at Christmastime but how many people post pics in February? ﻿ Enjoy.. it was our first and yes it listed a bit. The first night we had it, it crashed to the ground breaking a few ornmaments (although thankfully not my nicest ones) and scaring the beejezus out of us. Although I loved having a tree, I spent the rest of the holiday season sleeping with one eye open in anticipation that it would happen again. 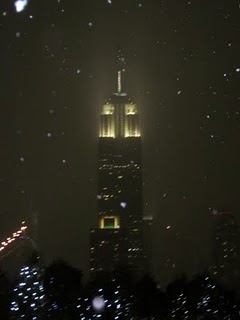 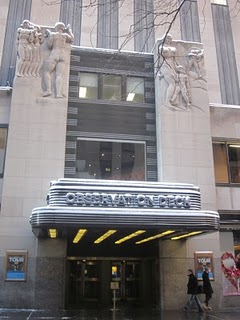 To date I've worked at the following New York landmarks: Trinity Church, Rockefeller Center, Tiffany, Thirteen/PBS, Waldorf=Astoria and have sung with the Chorus at Carnegie Hall and did voice over for a Chorus concert when they sang in Lincoln Center's Alice Tully Hall a few years ago. I've also worked at the Dramatists Guild located in Times Square, cater-waitered at the New York Public Library, took tickets at a premiere party for a Broadway show held at the Empire State Building and an improv group I was in years ago performed at a small club on Broadway. OK so it was at 114th and Broadway but it was on Broadway nonetheless. :) I also was interviewed for a New York Times article that came out four years ago about a weekly fundraising event that I run at a club in the West Village (then in mid-town - the article was about the changing face of mid-town businesses).

Now all I have to do is get an article published in the New Yorker (!) and find some way to be connected to the Statue of Liberty and I think I'll have pretty much covered the city in one way or anther.

Nothing more really to write, just wanted to state that this morning. BTW not a record by a long shot but it's 11:14 and I'm still in my PJs. Just sayin. :)

Best FB of the day

Best FB of the day, from @gabemost "Dear Egyptian demonstrators: Please do not damage the pyramids. We will not rebuild. - The Jews"

This has been a pretty awesome week which started out with reconnecting with an old friend, followed up by a kick butt Wednesday night event (go Bianca Leigh!) and crowned by seeing WICKED for the first time last night. There were four of us - three gay guys and a straight woman and none of the gay guys had seen the show. I wasn't wild about getting a soggy breakfast sandwich at the Oxford Cafe at 52nd and Lex this morning, but I have already harshed a co-workers breakfast buzz by describing it, I won't ruin yours too. :)

I have to make this short this morning because it's Friday and there's a stack of things that I've successfully avoided doing all week on my desk and I suppose getting to them before the weekend would be a good idea. (Dear Current Employer: The previous statement is not true, it's merely said as a way to make readers of my blog laugh. Don't fire me.)

Anyway, enjoy this little pic of trees after one of the recent snowstorms along Park Ave. I could title it "Frosting" because that's what it looks like (and man, doesn't that sound like something that would make the job of tending to the TOTALLY NON EXISTANT STACK OF AVOIDED PAPERS ON MY DESK a lot easier? I think so. :) 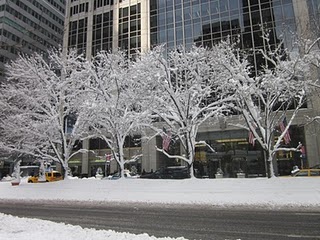