There's nothing quite like watching art being created before your very eyes - it's the very essence of the concept behind the Drama Book Shop's 'artist in the window' project that I wrote about last week. But in this video from artist Patrick Vale, we get to see nearly the entire process of putting together a hand drawn image of the view from the Empire State Building looking downtown. It's an incredible time-lapse idea. The closest I've ever seen to it was a similar type of video that a friend did of his process of creating a club poster in Photoshop. That took 12 hours. I can't begin to imagine how long this took (days? weeks?). 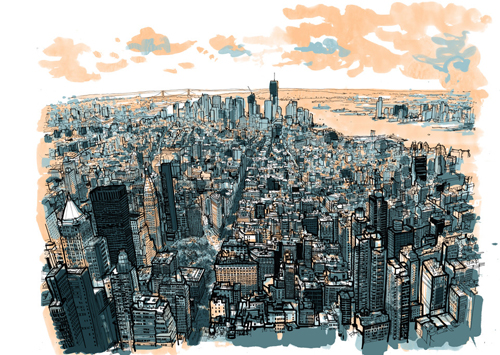 But it did motivate me to pick up my pen again and sketch a little. Friends from Mosinee will remember that Woody and I co-wrote and I drew a weekly comic strip in the Mosinee Times for 2 years from 1980-1981. Maybe someday I'll post some of those strips.

Anyway, the video is so impressive that it made me Jump for Joy remembering the comic strip (which is much better than lamenting that I haven't drawn regularly in a very long time... because it's a lot better to be inspired than it is to be intimidated (as my friend Kerry O'Quinn said once in one of his awesome editorials in Starlog back sometime in the late 70s/early 80s).

Empire State of Pen from BigAnimal on Vimeo.

Jumping for Joy - How Much Is That Playwright In The Window?

The other day, playwright Roland Tec spent a couple hours sitting in the window of the Drama Book Shop on W. 40th, an experimental artistic endeavor that invited many authors to sit and compose in plain sight of passers by.

I went by on my way to my weekly Bingo event not only to cheer him on and also to give him a little bit of a hard time (because if you can't bug your best friend, life has no meaning. Of course I kid. Really. :))

Anyway, little did I know that Ro was 'in character' (as he writes in this blog post on his site Extra Criticum) and I very nearly pulled him out of it.. unintentionally.

It got me to wondering when there might have been other times - when someone I knew was in their own headspace and I just happened to encounter them and took their distraction for negligence.

I've certainly had times when I've been working producing or managing an event and I've encountered a friend who didn't know I was working. Late last year, I worked at a party thrown by Sirius for their new "Studio 54" radio station. I knew several of the guests (the invite list was nearly a who's who of New York gay nightlife) and found myself having to remind my friends (who wanted to pull me to the bar for a drink) that I couldn't. I was a little sad to realize that they thought that I'd intentionally wear a black shirt/black pants to a gala (but I guess I digress). :)

I guess it goes to show you that you never know what's going on with someone else... and it's up to us to be good communicaters (both ways) before leaping to a conclusion. I'm happy to Jump for Joy, but less excited about Jumping to Conclusions. :)

It's hard to feel any kind of Joy these days - what with the Aurora shootings, shootings in Wisconsin and now, this morning here in New York outside the Empire State Building.

But we MUST find the Joy in life - because to quote that often (and trite from nearly the moment it was coined) phrase, otherwise the terrorists win. Even domestic ones. Even those without an agenda of creating terror. Those that can only work out their frustrations from the business end of a gun have always been with and probably, unfortunately, always will be. It is human nature. It is endemic to life on Earth.

And yet, while violence is a big part of the human condition, so is compassion, love, and yes, Joy.

So today, watch this video from May 2012, a flashmob in Spain, that brings an Ode to Joy and may it remind all of us of that there IS more to our world than guns and violence... that there is beauty in the world.

And that most certainly is something to Jump for Joy about. (Thanks to Roland for sharing this video with me)

Jumping for Joy for Ethan Bortnick 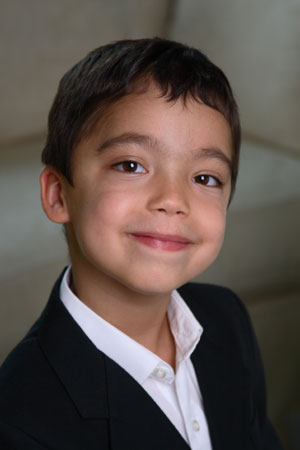 Some weeks ago Roland's parents, who live in Westport, introduced me to You Tube clips of next door neighbor Ethan Bortnick. Ethan is now 9 and oh yeah, he can hear a song once and then sit down at the piano and play it. Not flawlessly at first, but with a couple of tries, Ethan can master it. Really. 9. :)

The video below gives a lot more background on this miracle but it's gotten me to thinking - if no one told us we couldn't do something, how much more could we accomplish in our lives?

Thankfully no one ever told Ethan, "it's not possible that you can play that piece on the piano", He just did it. And even if they had, it sounds to me as though he wouldn't have believed them and would have just gone on and played anyway.

And that is why today, I am Jumping for Joy for Ethan Bortnick.

Jumping for Joy For Thelma #jumpingforjoy

Yesterday, August 19th was my Grandmother Thelma's birthday. She was born in 1904 and passed away in 2004, just 8 months shy of her 100th birthday. A grand lady who always kept her home

together, made more food than was needed and tried to keep up with a rapidly changing world (and over those years she saw a lot of change). She held on to some old world values, some good and some not so much... but she was always clear who she was and what she liked.

She played bridge with the same group of ladies for decades and kept those friendships til the end.

She was of Scottish heritage and it's where I get my red hair and my temper from. My middle name, Murray, is her maiden name.

Although there was a big divide between us in her not being able to understand me being gay, I nonetheless won her over late in life when I brought her Scottish heather mixed with red roses on one visit when I was studying at Northwestern. I would occasionally call her "my girl" and hold out my arm for her when we would get out of the car to go into a restaurant for a meal.

She appreciated manners and that rubbed off on me. I am probably more like her than I care to admit or is appropriate for the modern world. But her kind of class isn't something you learn, it's something you have or don't have and I'm grateful that she passed it on to me. Miss you Thelma. :)

This photo of her was taken of her at her home in Wauwatosa in the late 80s by my friend Kristen Kemerling, an excellent photographer, creator of Life Story Arts and childhood friend. Kris captured the very essense of Thelma's beauty. I would then give a framed photo from the shoot to my mom as a Christmas present. It turned out to be a present for me too as I got to forever have this photo on permanent display, and as a reminder of where I've come from. Looking up and seeing her there day in and day out, it's as if Thelma's there looking out for me. Because, you know, we redheads have to stick together. :)