As many of you know, my mother, Joan Altenburg passed away last week after a long illness. I got the call on Wednesday from my sister, Lynn. Mom had been in the hospital for the past three months and had died as "her body just gave out" (quoting my sister).

Lynn listed all the physical problems that my mom had but as I listened on my phone, I glazed over, numbed by the news. I had known this was coming. It was not a real shock. Mom had been ill since 2008.

It doesn't make it any less painful to know something's coming, though. 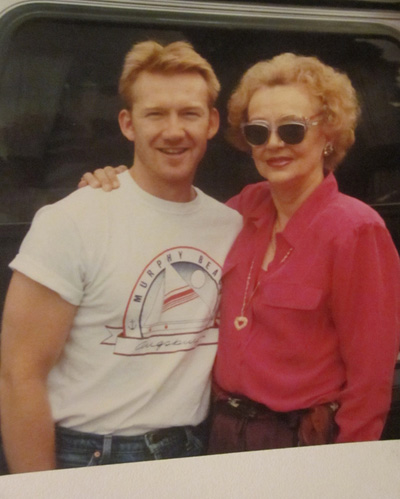 My mother Joan was “sparkly” (as Kristen put it), a unique and wonderful creation from God. Many appreciated her style, her charm, her humor and her warmth. Some did not. And some, I'm sure, were envious of her ability to light up a room, brighten up a party and make you, and only you, feel as though you were the only person on Earth when she smiled at you and hugged you.

Such is living an authentic life.

She could be emotional. She could be ditzy. She could be self-involved. She would give you a rundown on what she wore and what she ate the day before and list the days grievances.  But somehow, I don't know how, it all seemed to add to her allure rather than detract from it. Such was the mystery of Joan Altenburg's charm.

She could have changed herself to suit others' need for her to "fit in" to small town life. But Joan was authentically herself.

She was a stay at home mother and managed the house with our housekeeper Mrs. Kasmirsky. She had worked, for a time, at my dad’s brokerage business, but I think she was happy just to be at home.

She kept herself busy with a different craft project - one year it was decopauge, the next year sequins, the year after that, knitting. And then there were the popcorn balls. One Christmas, in the late 70s, she decided that everyone we knew should have popcorn balls.

They were basically inedible but great to look at. She had formed them beautifully and packaged

each one in a clear plastic wrap tied off by a colorful bow. After awhile, it seemed as though they multiplied, like tribbles, and even though we thought we’d given them all away, we would always find more. I suspect my siblings will find a few of them tucked away in the downstairs closet of my mothers' house, buried by time and unused overcoats.

While I grew up, my mom and I were incredibly close. I had her wrapped around my finger.. ah, but she had me wrapped around her finger too. And I think both of us liked it that way.

I was a “surprise” baby and I think that made us all the closer. We just loved spending time together. I found her fun, entertaining, warm and always interesting to talk to and her face would light up whenever she saw me. She gave the best hugs and the best kisses. The kind that a mother does best. What’s not to love about that?

I spent much of my childhood going out to dinner with my parents, going shopping with my mom and going on business trips with them.  Joan loved to buy clothes and spent much time searching for the newest fashions. Even when I last saw her, she looked impeccable – and that was after having spent a few weeks in a hospital followed by a few weeks in a nursing home and hooked up to oxygen. If my mom didn’t look fabulous, she (more or less) just didn’t go out.

Our best times were spent, however, in our upstairs bathroom when I was very young. I'd sit next to her while she’d spend a couple hours getting ready for an evening out. She'd stand at the mirror, putting on her makeup, unrolling her hair and casually singing old standards in a beautiful voice that I rarely heard outside the house. A single lit cigarette would smoulder in an ashtray on the edge of the sink creating a sort of smokey nightclub feel to the room. These were times that were unguarded and irreplaceable. And they were ours and ours alone to talk about everything/nothing.

When my Dad got sick in 1980, we spent many more hours together driving back and forth, from Mosinee to the hospital he was at in Marshfield. There weren't a lot of words spoken. How could their be? We both knew what was happening and speaking of it, in the best WASP tradition, was too much, even for us. But I'm glad that I could just be there for her. And her for me.

When it really mattered, when my Dad needed to be able to count on her, she stepped up and managed his care, managed his recovery at home each week after chemo and managed the funeral arrangements.

Dad had gone back into the hospital after the chemo failed and then, after a small stroke, slipped into a coma. She had the un-sparkly task of having to make the decision to pull the plug. A few days later, the hospital called. I knew when the phone rang what was waiting on the other side. My mom was outside, pulling clothes from the line as the wind blew and the daylight slipping away.

The look of anguish on her beautiful face when I told her that it was Marshfield calling, is forever with me. The hug she gave me following the call, intense. And we held hands at his funeral, both of us finding ourselves nervously convulsively laughing over something the minister said and both of us holding each other’s hand, digging our fingernails into each other to get the other to stop.

Although my sister suggested that she was already husband hunting during Dad's illness, and although she did date several nice guys in the years after dad died, and although she was financially challenged, she never re-married. I don't think anyone could ever replace “her” Jack. Dad himself would probably have remarked that that was "foolish" but he was no doubt the love of her life.

We spent a quiet, calm winter and spring together after Dad died. Comforting each other's grief with absolute silence and polite conversation. We sat numbly in the living room watching TV shows like FANTASY ISLAND and LOVE BOAT.

And when I came out in 1989, my mother was gentle and supportive of me at a time when I needed her support the most. I’m pretty sure that she wasn’t completely OK with me being gay, but at least during that first conversation, she provided me with a foundation of acceptance.

During the growing up years, at the end of the day, and as my Dad was upstairs watching JOHNNY CARSON, Joan would sit at the kitchen table by herself, switch on TV or some music and begin the process of putting her hair up in rollers. A lit cigarette would keep her company and I imagine she would enjoy the stillness of the late night after a usual day of the three ring circus known as the three of us Altenburg children, a housekeeper, a husband and the normal stresses of life.

I would invariably parade down for water, a sandwich, or just to sit with her.

Occasionally, my sister and I would entertain her by fake tap dancing and serenading her with the cheesy closing number sung each week on THE LAWRENCE WELK SHOW, a show I don't think any of us actually watched, but we kind of came to love the song...

And though it's always sweet sorrow to part

You know you'll always remain in my heart

Good night, sleep tight and pleasant dreams to you

Here's a wish and a prayer that every dream comes true

And now 'til we meet again

She would laugh and the smile on her face lit up the entire room. But she would eventually shoo us out so she could get ready for bed. But sometimes, once we were upstairs, we'd sing another chorus into the rickety “intercom” system connected to the kitchen. I imagined her laughter and her shaking her head at her crazy kids. 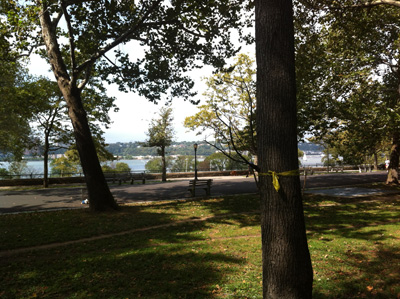 When I was in my 20s and early 30s, Joan would offer to ‘tie a yellow ribbon’ around a tree in the front yard as a way of telling me, in the midst of much family drama, that I was still welcome and that our house on River Road was still my home. My siblings thought it corny and eventually made her stop doing it. But she wouldn't be deterred, and would hang something yellow on the front door instead. As we were both sentimental creatures, I loved it and cherished that she even thought of it.

So this past Saturday, as her memorial service was happening in Mosinee, I spent an hour in Riverside Park listening to “Tie A Yellow Ribbon” on my iPhone just thinking of her. As I walked out of the park, I noticed the New York equivalent to a yellow ribbon - a yellow Police tape tied to just one tree. I decided that this was a sign from my mom that she was there with me. 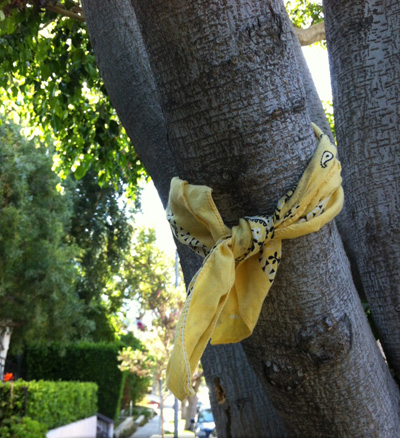 The next day, on Sunday, I had a small celebration of her life with close friends and we wore yellow ribbons, and my dear beautiful friend Kristen (who first referred to my mom as "sparkly") tied a yellow bandana to a tree outside the conference she was at in Los Angeles.  Joan was literally remembered from coast to coast. As it should be for someone so sparkly.

So, today, I tie a yellow ribbon around my heart. So that Joan always knows that my home is open to her.

And I will sing LAWRENCE WELK song again in her honor, even if this time, I won't have her sitting across the room laughing at my campy performance.

And more importantly, after all is said and done, I will remember the kisses. For those, will have me Jumping for Joy.. and for Joan.

(p.s. this was the first video that I found on Saturday... and it's amazing, they were all wearing yellow) :) 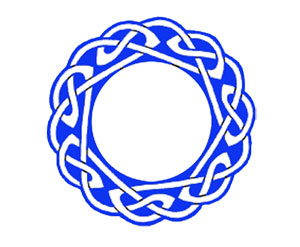