Jumping for Joy for Brene Brown and The Power of Vunerability 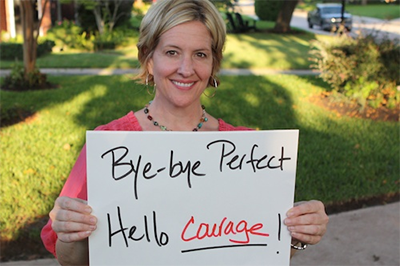 urge you to take 20 minutes and take a look at it yourself.

"Maybe stories are just data with a soul" - Brene Brown

"In order for connection to happen, we have to allow for ourselves to be seen. Really seen." - Brene Brown 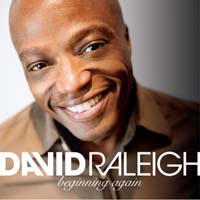 Recently I had the pleasure of meeting a pretty awesome talent manager, Sharon Klein, and because I find myself in many situations - weddings, fundraising events, etc - where I am often hiring or making talent referrals, I get exposed to a wide variety of singers, actors and future celebrities.

And that's how I have 'discovered' singer David Raleigh. Granted I just have checked out one song and one video, but I was instantly impressed with the quality of his voice and also how joyful his video ode to New York is. It's about how we, as humans, are all 'one together' and in this contentious election cycle, I think it's a message that I certainly need to remember! :)

So here it is for you my Jumping for Joy friends!

For the past thirty one years, October 22nd has been a significant day in my life as it's the day, in 1981, that my dad, Jack Altenburg passed away. I was close to him and his death affected me profoundly.

And, as a way to commemorate/celebrate his life, every October 22nd, I've set aside the day as a special day when I do "Jack things"..... like going to a museum or spending the day visiting a marina (my dad loved museums and learning and also loved the boat he owned, the Teena Marie).

But then a little miracle happened.

A year ago I was put under a year long contract to work as a "day of"wedding manager for a company that specializes in same-sex weddings. And my first wedding was Saturday October 22nd, 2011.

I realized, that I was actually grateful to have a 'distraction' from the emotional tug I would no doubt feel.

The brides were Cindi and Dana from Atlanta who had been together for many years and were excited to make it legal. About 20 of their friends came from all over the country to witness and celebrate. 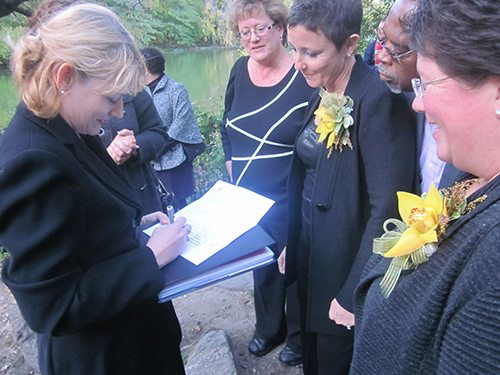 The group of us traveled from their hotel on Central Park South to Central Park itself where we met up with the officiant, Rev. Annie, who walked us all to Wagner's Cove where we would hold the ceremony.

Wagner's Cove is a gorgeous place - down a small hill along a lake and under a gazebo amid the beauty of the Park.

One of the brides had arranged a surprise for her future wife - to have a favorite singer flown in from Nashville and show up unannounced to sing during the ceremony.

I gathered the wedding party together at the gazebo and then I slipped away to make sure the singer was in place up atop of the hill.

As I started back down, I encountered three junior high aged boys who were about to descend down the hill in all their rambunctious fun not knowing there was a wedding going on.

I quickly filled them in and asked if they could hold off going down for just a few minutes. They were nice about it and asked who was getting married. I pointed at the two brides. They looked at them. They looked at me and asked "is it a real wedding?" I nodded. "It's a real wedding alright", I said. I could see that they were sort of processing this and although they didn't say it, I could see the thought bubble rise over their heads of "oh, cool".

For all my life, I'd heard the common slurs that we all know when referring to gays and lesbians and to be honest, I kind of tensed up expecting the worst from these kids. But they surprised me, pleasantly so.

After the ceremony, the photographer took the brides off for a shoot at Bethesda Fountain while I escorted the wedding party back to the waiting limos. Later the brides would tell us that, as they walked back through the Park holding hands, they received lots of shouts of 'congratulations'. This surprised them. They didn't think, this being New York, that they'd get catcalls, but they didn't expect such overwhelming support either.

Although I'm well aware of just how many straight allies the LGBT community has, we are also still in a time when marriage for gays and lesbians is still a new thing - and not everyone is on board with it, even in New York City. So I was relieved and so happy that the Altanta brides (and myself)  experienced the very best that New York has to offer.

Once the brides and their party were settled in to their reception, it was time for me to leave. A kind of electric shiver of excitement coarsed through my body as I walked along 14th Street out into the night.

But the best part, of course, was the realization that October 22nd didn't have to be a sad day for me anymore. No, now it would only be remembrance for my dad, and a celebration of a new awesome chapter of my life.