Recycle Your Electronics, Save the World

In this season of buying things for the holidays, let's not forget the responsibility that we have to recycle your old things responsibly - clothes to charitible organizations or your local church that can give them to the homeless, books to schools (you know, ones that don't teach that Moses founded America ) and electronics. In the video below a filmmaker takes a trek across the ocean to find out just where our electronics go when they go to get recycled. However, he suggests, there is a different way - Gizmogul. You can read all about Gizmogul here.

Check out the video below - at the very least, it's a way to get some perspective for those of us who forget just how good we have it.

The Electronic Afterlife from Gizmogul on Vimeo.

This was posted on my friend Keith Mozingo's FB page this weekend and it felt like a very Jumping for Joy thing and so I'm sharing: 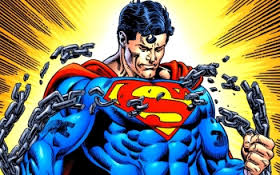 "There are no bars between you and the wide fields beyond. No matter how circumstance has tried to convince you that your reality is set in stone, no matter how long the same patterns have encircled you like shadows, you are free in your spirit, free enough to cross over the threshold of chance, free enough to find the friends who love you, free to be the beloved of the One who watches you each night and longs to take you flying. Step out of your own past, for it is old with worn reasons, and walk out to the gate that stands open in the garden, for your life is new with the possibilities you have already imagined." - Bishop Steven Charleston

Nice words as we inch closer to the end of the calendar year and to a nice, fresh, new beginning. Happy Sunday all!

My favorite meme this week was the "they closed Wisconsin" photo - which I'll admit I had a good laugh at and was clearly made by someone who didn't come from Wisconsin. Because as all Wisconsinites know, Wisconsin never closes especially due to something as trifling as snow. Sure some of the roads might be closed for an hour or two (and this probabaly refers to some schools being closed) but do not underestimate the power of the people needing to get to Shopko. 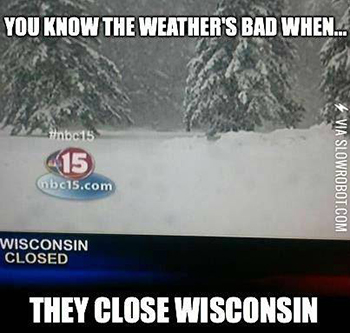 I've seen people out there with shovels digging their way out and then heading to KMart for the blue light special.

I'll admit a fondness for that time as a kid when I'd know a big storm was coming and I had a sort of narrow window to decide if I was going to let myself get snowed in at a friend's place or if I was going to try to get home.

Because there's that moment when you look at the parents of your friend with a determined "I've got to get home" look and then they tell you that you can just stay. They're not stupid, they know you're hoping their let you stay and they do and you're there for life. Yeah, there's an 8 year old vowing to brave the snow and walk a mile in the whipping snow and there's the parent giving up because they know they can't really send you out in that.

And that's when you and your friend head to the basement and play the game of Life for ten hours and eat nothing but ice cream sandwiches from the basement freezer. (as a side note, my friend Sandy and I would indeed play Life for hours and hours creating all sorts of extra rules so that the game could go on. By the time we'd finish we'd be hauling an extra car or two of kids. When you're 9, lots of kids seems like no big deal, the Duggars - from TLC's "19 and Counting" notwithstanding). :)

Or there's the Urgency Shop aka the Panic Buy - where mom and I would race to the store to stock up because although neither the city nor the state would actually shut down, we might be snowed in for a day or two. This is when we'd buy enough food (and I would buy enough comic books) to be snowed in for a week. After my dad passed away in the early 80s, my brother would make routine forays into the cupboard to purge it of outdated canned goods. As he pulled things out, I was sure I recognized items from a panic buy from 1975. Today we could have sold them on Ebay as "collectibles", the marketing on the labels was so old.

But rarely were we kept in the house for very long  but it was comforting having a full stock of Jolly Good soda just in case we couldn't leave the house for days and our only concern was the lack of cheap fizzy drinks.

To this day, living in New York I consider how much food I really need to have on hand at any one time. Given the limited cupboard space, it's not much. I think I have a half a jar of Skippy and some old Saltines. There might be a mason jar of Quaker Oats up there behind a bottle of Makers. Yeah, New Yorkers don't stock food but we do stock booze. Make of that what you will.

But I don't really understand panic buying in New York, because even during Hurricane Sandy the deli at the end of my block was open for business and I seriously considered running down for a bag of chips. If not for the flying branches, I might have made a break for it. But then, I'm from Wisconsin, and you know, Wisconsin never closes.

Jumping for Joy - Yes, even in 27 degrees 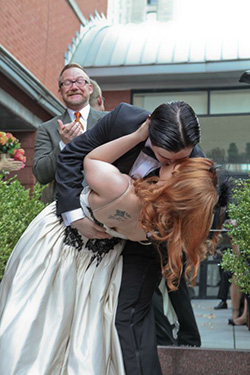 OK so there's a gentle breeze blowing through my apartment. Gentle and chilling. You see, even though I've managed to change the locks both on the front door and security gate (the window off the fire escape) and had the landlord fill up the various holes in the apartment walls with silicone (I returned home from a recent trip with .. uhm 'evidence' that I had an unwelcome - and non rent paying - guest) and even replaced old curtains with light blocking blinds, the one thing that can still get in is a gentle chilling breeze when the top part of the living room windows inch down and provide a.. refreshing reminder that it's 27 degrees out.

But, for me, the cold is not a problem. I can put on more layers and I rather like the feeling of being bundled up in my pea coat, hat and scarf. What doesn't work for me is the extreme heat and humidity - this past summer wasn't so bad - it was, in fact, rather pleasant all the way around (well, weather wise that is - for friends who know of the Chicago Drama, know that that part wasn't pleasant at all).

But back in August 2012, I married several couples in outdoor settings and as you might remember, the summer was bruttally hot here in the city. At the time I was really wasn't able to replace my traditional (and traditionally hot) suits and so I married couples and suffered. Thankfully I got through the heat inhalation I was experiencing. It was routine for me to finish a ceremony, walk around the corner and start stripping off wet layers until I was home, removing one piece (the tie, the suit jacket, etc) at a time until I was home and my living room was littered with pieces of suit.

At the wedding of April and Michael on August 5, 2012, the heat had gotten to me but as a theater person, I have learned to smile smile smile. It was a big crowd and remarkable for me in my personal journey of officiating in that it was my first (and, to date, only) straight couple. I have to admit, I had one little moment during the ceremony where my brain did a sumersault and I was confused by not saying "husband and husband" or "wife and wife". It was what I think happens when an officiant has to do their first same sex wedding and has to make that same sort of adjustment.

Anyway, the bride was gorgeous, the husband handsome and the group went off to dinner after the ceremony and I returned home, pieces of my suit strewn about the apartment and me, laying in front of the air conditioner for the rest of the day.

So today as you make your way through the world and if you're cold, just recall those hot summer days when you thought you'd never be cool again!

As many of my friends know, because they've hardly seen me, I've been traveling a lot for work since the spring. Not every day or every week, but one of those schedules where you sort of get back and 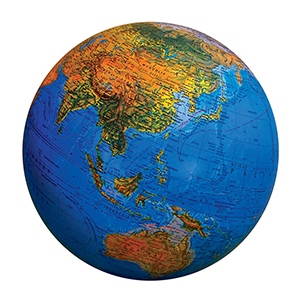 just about get caught up on email or snail mail or calls when you'd be back out on the road.

I love to travel and it's especially great when I'm somewhere that I have friends and have the opportunity to catch up with them in person.

Still, for all the rush rush rush of it all, it's nice to sit back and admire the beauty of the world even if it's just a few minutes at sunrise on a beach in Fort Lauderdale or how Manhattan looks at sunset from a hotel in New Jersey.

The video below captures that stillness amidst the chaos that I'm talking about. To be at peace in the wild of the world is definitely something to jump for joy about.

For the upcoming week, I challenge you to find a moment in your day when you look around and notice the beauty around you you've never noticed before. And if you want to let me know what you found, drop me a note through my Facebook account.

Have a great day!