This is My Surprised Face

Welcome Whomever You Are 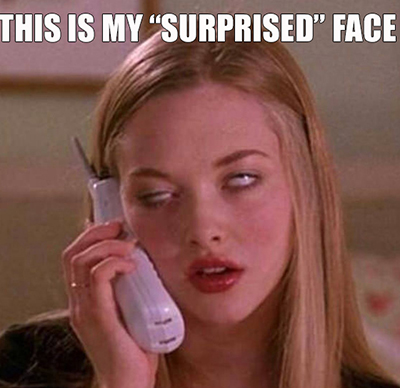 I like doing this blog as opposed to other blogs I've done because I have low expectations.

I post things that I like to post and generally no one really pays attention. Mostly these are little essays that I want to write, animation I've found that I want to keep, quotes, and, of course, MEMOs. I have been, admittedly, a bit of a traffic whore when it's come to driving traffic to one particular site I worked on for many years not in the sense that I would do anything for traffic, but more in the sense that I was obsessed with numbers hoping that whatever it was that I was doing was attracting enough attention from the group I was appealing to. Mainly this was to draw people to the site to promote the fundraisers I was producing, but it was also a little bit about ego. See graphic at right for a reflection of what you're saying to yourself right now.  <wink>

Anyway, the other day my one day total here jumped up to 156. That's about 155 more than usually stop by. I'm not 100% sure why that is or where they came from. Even though Typepad has a feature to track incoming traffic, it doesn't hold history, and since I saw the number of hits a couple days after it'd happened, I don't know who showed up or why.

Well, if you're still lurking and/or checking back in, you're welcome to stay and/or come back anytime. I am working on some things to post so you might be jumping on at the right time. I'm always available to yak, feel free to leave a comment. I monitor them so if someone cranky shows up, you, the reader, won't know it.

Finally, tonight before I tuck myself into the bed next to the Mister who is smart enough to have been in bed already for like an hour, a short word about the photo to the right -- it's from some movie and I usually post it on the Facebook because I think everyone should have a recurring theme that people can count on them for. And, this is mine. One of mine. One I use on occasion. When I feel like it. Like now. Here it is, just in case you missed it before.

Have a great night everyone and if you're reading this in the daytime, hope you have a faaabulous day today!

Tags: bloggety blog blog, do these tags really work? I don't think so, faaaabulous, the mister, This is my surprised face, whatever happened to the translyvania twist?